A US Pro Circuit Event

Welcome to the Tiburon Challenger!

To get tickets, volunteer or find more information, please go to www.tiburonchallenger.com

Fleet Week in San Francisco makes a flyover by the Blue Angels likely at today's finale. 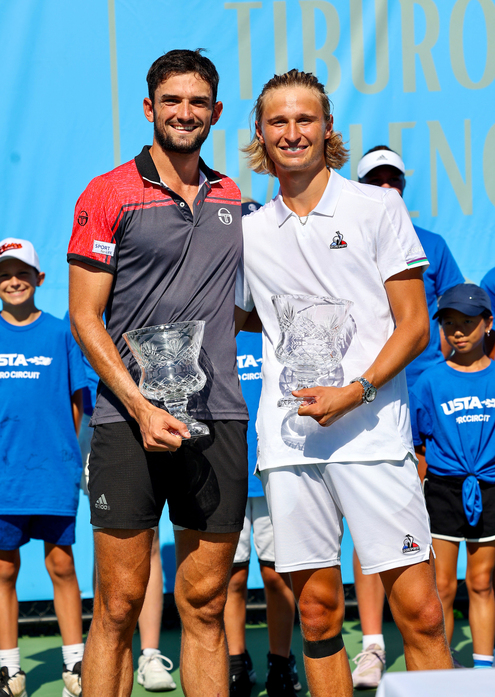 Strategy, finely-honed skills and athleticism were on full display on the courts at the Tiburon Peninsula Club on Saturday. First Leandro Riedi of Switzerland and Valentine Vacherot of Monaco outplayed Wild Cards Ezekiel Clark and Alfredo Perez to win the doubles championship.

Next, American Zachary Svajda overcome Alexis Galarneau of Canada in a closely-fought match that had spectators showing  admiration for both players by cheering for their skill and well-played moves. Svajda bested Galarneau to go to the finals.

In a high-anticipated match, betwen Tiburon Challenger veteran Denis Kudla, an American who's a native of Ukraine, took on fellow American player Ben Shelton, who Brad Gilbert predicts will be one of the world's top five. Kudla won the first set, and Shelton took the second, but then Kudla retired when an injury forced him to withdraw. 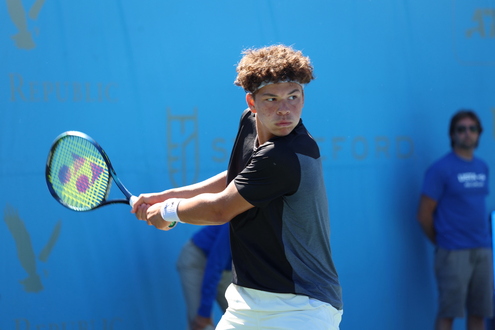 In doubles, Wild Cards Ezekiel Clark and Alfredo Perez face off against Leodro Riedi and Valentin Vacherot in the doubles finals, which begin at noon. Singles semifinals follow. Saturday promises to be an exciting day for tennis!

Can't make it in person? See the action on live streaming at https://www.usta.com/en/home/pro/pro-tennis-events/usta-pro-circuit-men-s-live-streaming.html.

Interested in statistics? Here are some of the Tiburon Challenger's Top 10, with France's Enzo Couacaud  (above) scoring the most aces. 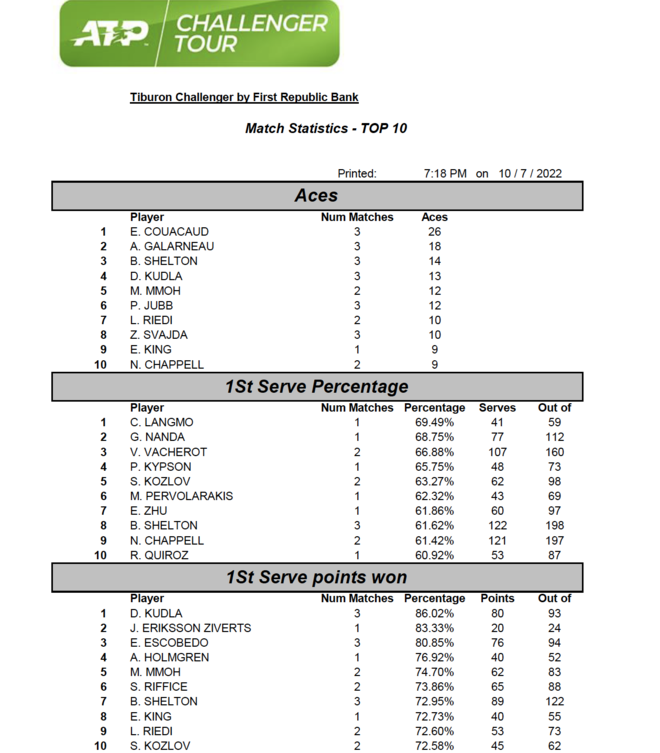 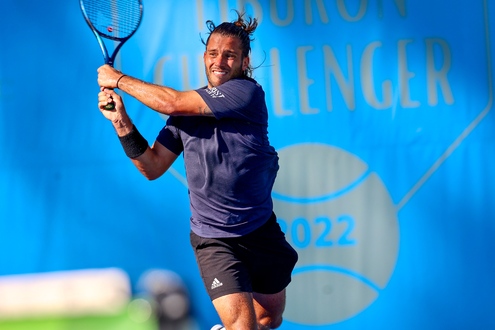 Alexis Galarneau defeated Stefan Koslov on Thursday, knocking another seeded player out of competition. Galarneau takes on Paul Jubb in the quarterfinals on Friday in what promises to be an exciting match between two up-and-coming players to watch who are newcomers to the Tiburon Challenger. Unseeded Zachary Svajda, who defeated Michael Mmoh in a tight match, faces [7] Ernesto Escobedo today. 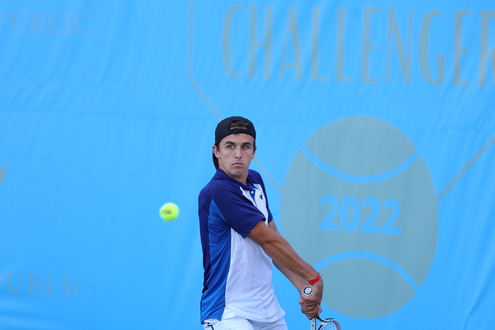 Zachary Svajda (above) upset 3rd-seed Michael Mmoh—2018 Tiburon Challenger champion—in singles play, in a demonstration of the talent and skills young players are bringing to the Tiburon Challenger. Svajda come back from a 1-5 deficit in the third set to defeat Mmoh; 6-3, 5-7, 7-6(4). "The level of tennis throughout the final set was of Grand Slam quality," said tournament director Adam Gagnon, adding that it took more than 30 shots of power and precision from both players to earn a point. Svajda moves on to Friday's Round of 4.

Among Thursday's highlights, Leandro Reidi takes on No. 1 seed Denis Kudla, and Paul Jubb and Qualifier Alex Michelsen face each other, as they vie for spots in the Round of 4.

A range of emotions emerges on the courts when play becomes intense
. 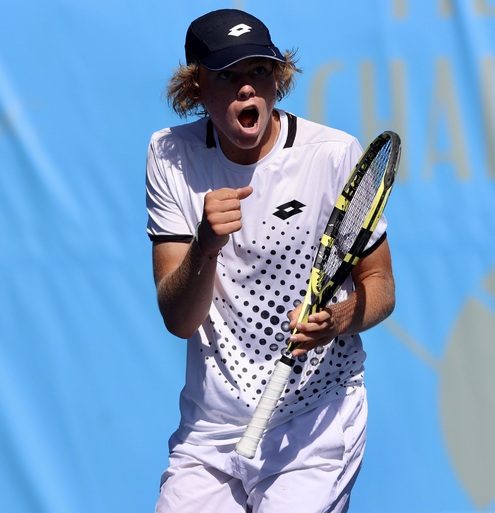 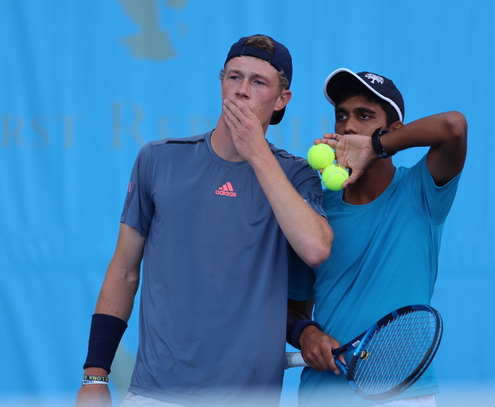 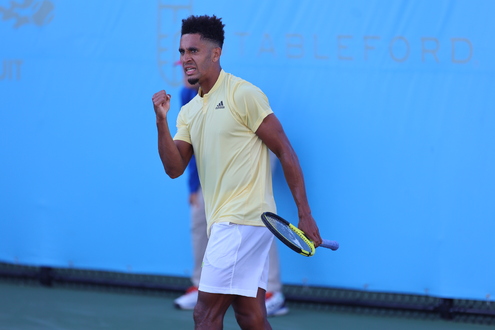 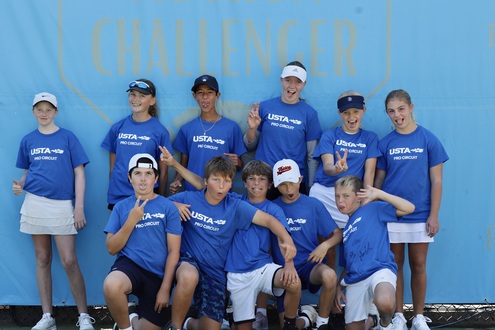 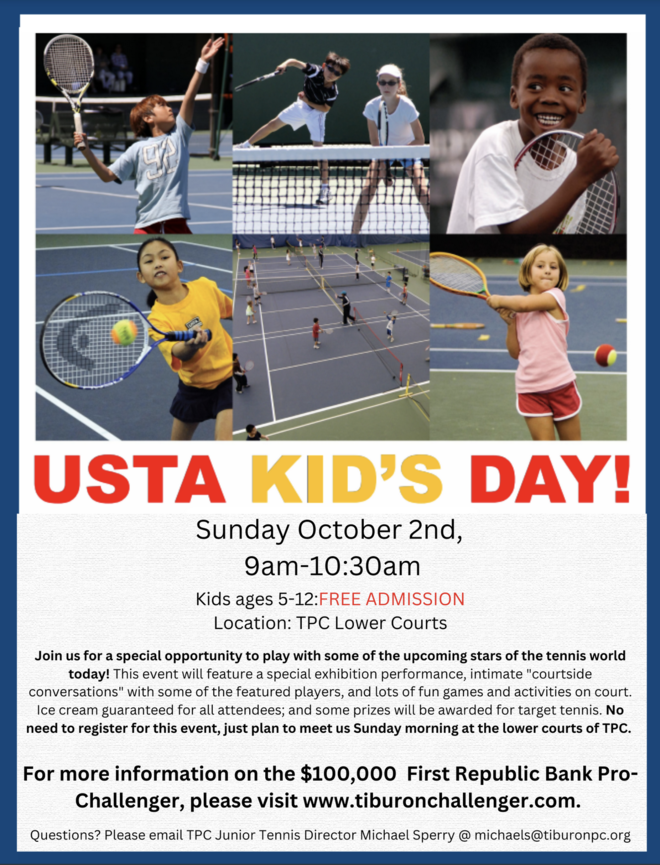 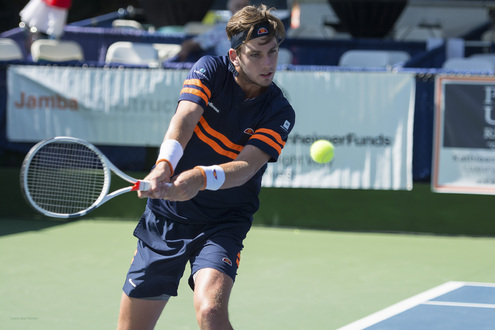 Rising stars in men's tennis from around the world come to Tiburon for the Challenger. Past competitors include Frances Tiafoe and Jack Sock (2012 Tiburon Challenger winner), who defeated Roger Federer and Rafael Nadal in the last match of Federer's career. Cameron Norrie (above), who performed well in this year's U.S. Open and Laver Cup, won the trophy in 2018.

The draw is 32 for singles and 16 for doubles, and we're looking forward to a very exciting week. 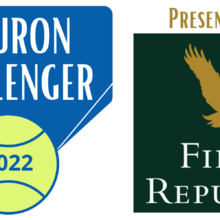