Back on Mount Tam - Hello Dolly

"Gypsy" Lights Up The Barn 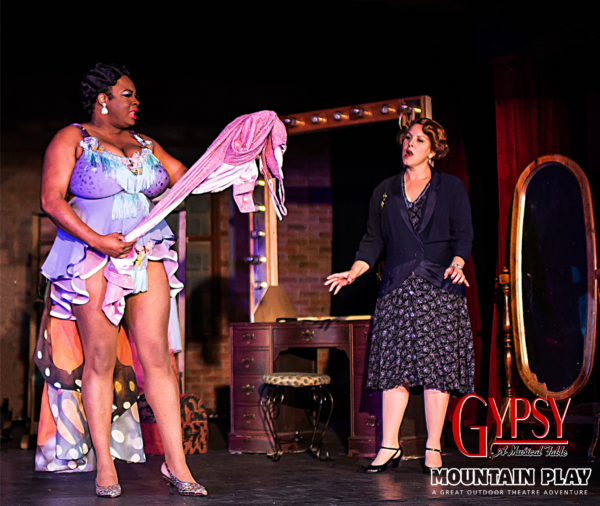 Tanika Baptiste as Tessie Tura and Dyan McBride as Rose in Gypsy, a Musical Fable

With a small stage, an indoor setting and a fraction of its usual audience, the Mountain Play in autumn is a much different experience than the mountaintop extravaganza that draws thousands to the Sydney Cushing Memorial Amphitheatre in spring. Even so, it’s proving to be a perennial favorite. For the third year, the Mountain Play is partnering with Ross Valley Players for a fall show at the Barn Theatre at the Marin Art and Garden Center, this time to present Gypsy, a Musical Fable. 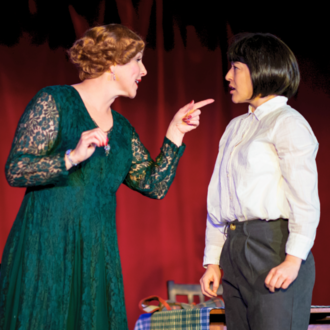 The memoirs of burlesque artist Gypsy Rose Lee inspired the Broadway favorite, and with book by Arthur Laurents, music by Jule Styne and lyrics by Stephen Sondheim, Gypsy premiered in New York in 1959. Although a musical, the show has considerable depth, with rich characters and a true story with challenges, disappointments, the development of self-awareness and success at its heart, as well as memorable music and great dance routines. Its enduring popularity has resulted in several revivals and numerous productions abroad.

Dyan McBride is a standout as Mama Rose, the ultimate stage mother, who does whatever it takes to push the careers of her young daughters forward in the fading years of vaudeville. McBride plays a complex character who’s determined and passionate in the quest for her family’s success, but also vulnerable as she sidelines the opportunity for lasting love and overlooks the underlying motivation that drives her—her own frustrated ambitions.

Photo: Dyan McBride as Rose and Jill Jacobs as Louise 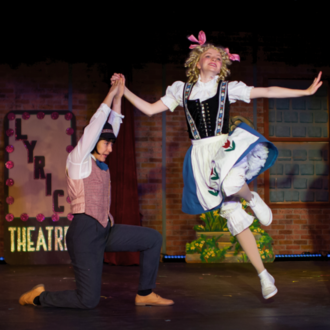 The story starts with her young daughter June taking center stage. Alexandra Fry plays Baby June while Julia Ludwig takes over as Dainty June, an older iteration of the character. Rose’s elder daughter Louise, meanwhile, is awkward and uncomfortable in supporting roles, first as one of Baby June’s Newsboys and later as one of Dainty June’s Farmboys. She takes center stage only after June, who is compliant and appears happy, abruptly leaves to elope with another performer, making a clean break and leaving Louise to fill a role she doesn’t want. Jill Jacobs portrays Louise as a girl who is uncertain and lacks confidence in her ability as a performer in her younger years. Over time, however, she develops into a confident young woman, who takes advantage of an unexpected opportunity and finds a niche where she shines. 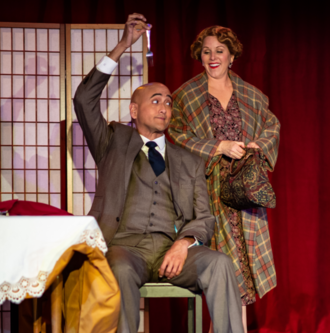 DC Scarpelli is Herbie, the girls’ agent and Rose’s love interest, and he shows a range of emotions, ranging from a business-like demeanor to elation to eventual frustration at Rose’s inability to make their relationship a priority. Michaela Marymor, Libby Oberlin and Tanika Baptiste play burlesque showgirls who infuse a dance routine with energy and color, and they’re members of a strong cast, with several actors playing multiple roles, Marymor, Oberlin, Ludwig and Fry among them.

Photo: Herbie and Rose in a Chinese restaurant

Zoë Swenson-Graham is director and choreographer, and she makes the show, which runs three hours with a 15-minute intermission, move along at a steady pace with dance numbers as high points. Jon Gallo is the musical director, and unlike the Mountain Play in spring, the music is recorded rather than live, but it works well in the Barn’s limited space. Among the familiar songs are Let Me Entertain You and Everything’s Coming Up Roses. 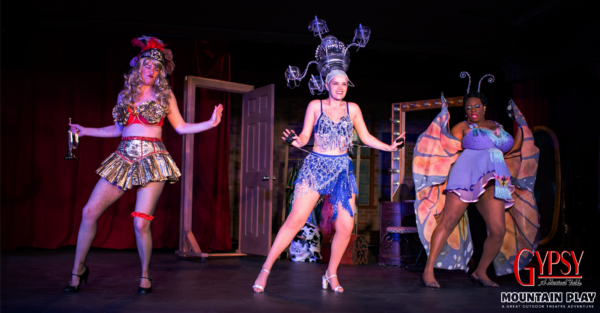 Adriana Gutierrez does costume design, from the flamboyant feathery confections of the burlesque dancers to Rose's evolving wardrobe as the family's financial cirucmstances change. Scenic director Zachary Isen transforms the stage to show how the fortunes of Rose and her daughters change as they find work in increasingly seedy theaters. Then simplicity puts the focus on Louise once she becomes Gypsy Rose Lee.

The Barn Theatre itself has undergone a transformation with comfortable new seats, a refurbished lobby, a stage that appears more spacious and even a new kitchen, which offers intermission treats. It seats just 99 but has the advantage of allowing an intimate experience for both cast and audience. Add the Mountain Play’s spirit, an engaging story, adept direction, polished players and catchy tunes, and Gypsy is a winning entry in the Marin tradition’s repertoire. 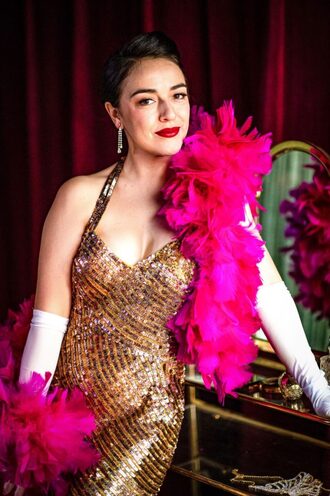 The Barn Theatre itself has undergone a transformation with comfortable new seats, a refurbished lobby, a stage that appears more spacious and even a new kitchen, which offers intermission treats. It seats just 99 but has the advantage of allowing an intimate experience for both cast and audience. Add the Mountain Play’s spirit, an engaging story, adept direction, polished players and catchy tunes, and Gypsy is a winning entry in the Marin tradition’s repertoire.

Gypsy, a Musical Fable runs from November 10 to December 18, Thursday at 7:30 p.m., Friday and Saturday at 8 p.m., and Sunday at 2 p.m. To find out more and order tickets, go to https://www.mountainplay.org/barn22/. Seats are first come, first served.

Mountain Play: Back on Tam with Hello Dolly 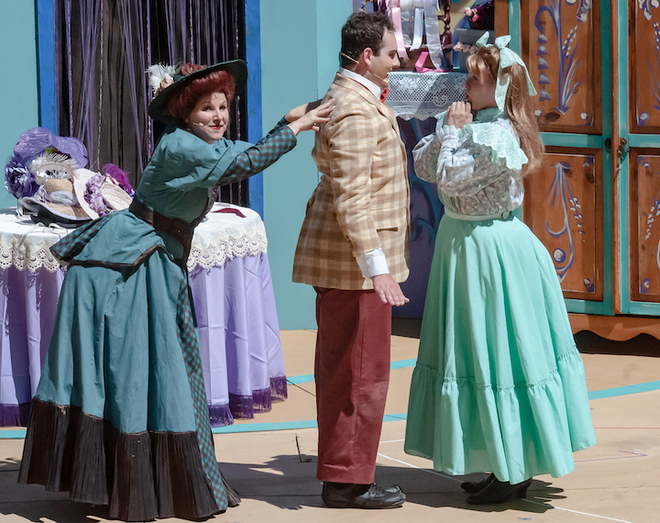 After two years of quiet at Cushing Memorial Amphitheatre, the Mountain Play is back with live music, colorful characters and plenty of action. The Broadway favorite Hello Dolly opened on the stage high atop Mt. Tamalpais on May 22, and “We’re back where we belong,” said executive director and artistic producer Eileen Grady, who welcomed the first audience since COVID-19 forced the annual outdoor production to take a two-year hiatus and put Hello Dolly on hold.

Thornton Wilder’s play The Matchmaker inspired Hello Dolly, and the musical had its Broadway premiere in 1964, with lyrics and music by Jerry Herman and book by Michael Stewart. The show, with Carol Channing as Dolly in what became her signature role, was an immediate hit and won 10 Tony Awards, including Best Musical. It’s a crowd-pleaser with a story revolves around matchmaker Dolly Gallagher Levi and half-millionaire Horace Vandergelder, who is seeking a new wife so he’ll have a woman to take care of his home. He has someone in mind, but Dolly has her own ideas about a good match for Horace, and her machinations take them from Yonkers, NY, to New York City and involve a series of matches, some intended and others serendipity. 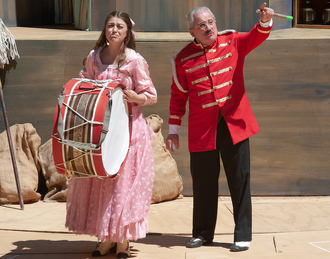 Dyan McBride (Mamma Mia) plays a strong-willed, spirited Dolly, who can be charming or determined, depending on what the situation requires. Randy Nazarian (left with Jill Jacobs as Ermengarde) is the miserly, often demanding Vandergelder, who plays right into Dolly’s hands. His solo Penny in My Pocket wasn’t on the original song list but was added to a Broadway revival starring Bette Midler, and it’s a perfect fit. Nazarian (Guys and Dolls) and McBride are versatile singers, dancers and actors who take a variety of roles in stride and make them their own. Chachi Delgado and Zachary Francis play Cornelius Hackl and Barnaby Tucker respectively, and they’re employees of Vandergelder’s Feed Store and likable clowns who set off on their own adventure and learn a little about life along the way. Jill Jacobs portrays Ermengarde, Vandergelder’s niece, who is intent on making a particular match of her own. 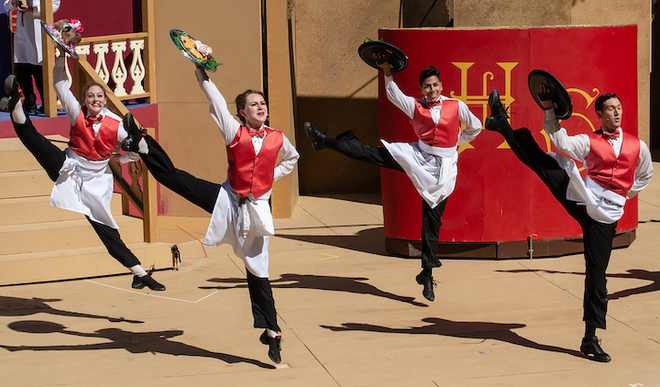 Mountain Play veteran Jay Manley directs with a sure hand, and Zoë Swenson-Graham is the choreographer, responsible for getting members of the ensemble in the right place at the right time in complicated dance numbers, which seems like an amazing feat. The scenic design is pared down from Andrea Bechert’s original, but it serves the purpose, with revolving sets that allow quick changes from one location to another. Mishka Navarre’s costumes take us back in time to the late 1800s and range from Vandergelder’s dumpy suit to the ladies’ elegant dresses to the waiters’ trim uniforms at the Harmonia Gardens Restaurant, where the different threads of the story collide. David Möschler directs the Mountain Play Orchestra, which is visible at the side of the stage. 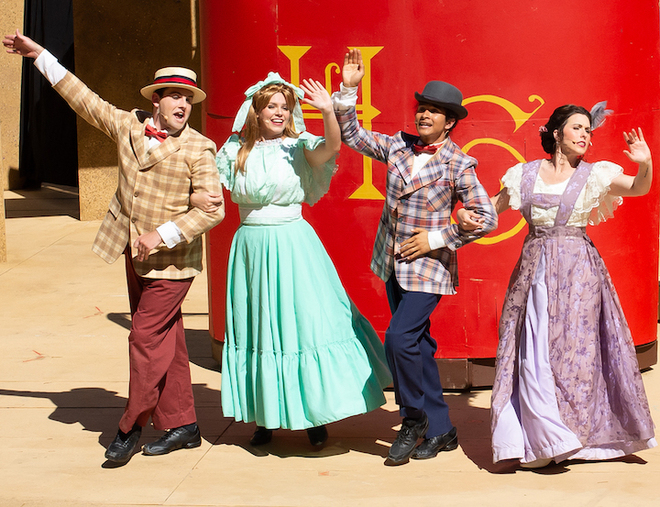 This year’s production of Hello Dolly is more than simply a show. It’s the return of a Marin tradition and a sign of some degree of normalcy after the isolation of the pandemic. “Our annual gathering on beautiful Mt. Tamalpais renews our sense of community as we share picnics, the view, the fresh mountain air and the joy,” said Grady. The Mountain Play is an experience, and it’s gratifying to see it back where it belongs. 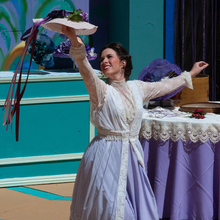