A Doll's House Part 2: Life on the other side of the door 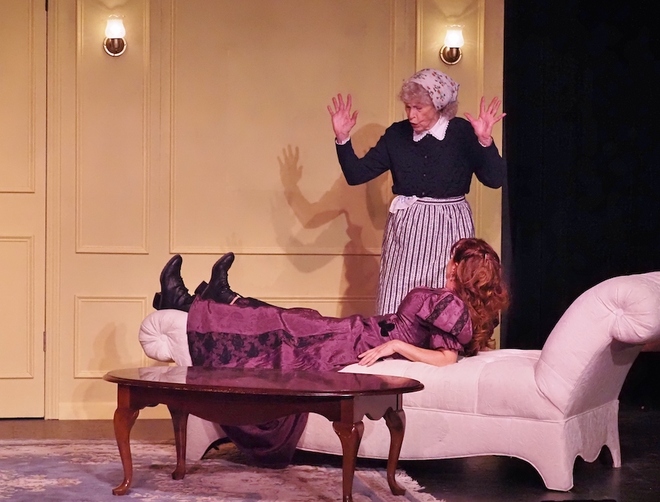 When Nora Helmer walked out the front door of her home, slamming the door behind her, she left her husband and children behind forever. Her action in the concluding scene of Henrik Ibsen’s A Doll’s House was stunning, but she could no longer tolerate playing the role of a submissive wife and felt compelled to create a new life as an independent woman. Ibsen wrote the play in 1879, when women had few rights and were expected to conform to societal expectations, and his heroine defied conventions and would have faced a hostile world. Ibsen left us hanging, however, because without a sequel, we had no way to know how Nora fared—or even if she succeeded. Then in 2017, award-winning American playwright Lucas Hnath came to the rescue with A Doll’s House Part 2, which allows us to see, in retrospect, how Nora’s life unfolded. The new play, currently onstage at Novato Theater Company, takes place in 1895, when Nora visits for the first time since her abrupt departure 15 years earlier. 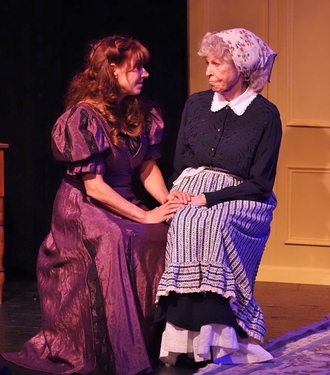 The play begins when Nora returns to confront her husband Torvald and demand that he finalize their divorce. Hnath tells the story in three acts, each showing an interaction with a character Nora has abandoned. The first is with the housekeeper/nanny Anne Marie (right), and encounters with her daughter Emmy and Torvald follow. Each character reveals the consequences of Nora’s exit from a different perspective, and Nora has the opportunity to respond and explain her motives. The cast is a well-balanced ensemble with excellent performances by actors who engage the audience and provoke one to think about the issues the play raises and the arguments it presents. The play is about Nora, but, explains director Gillian Eichenberger, “This is not inherently a feminist story. The desire for freedom, self-worth and equality in feminism are what drive Nora, but they are universal values.” 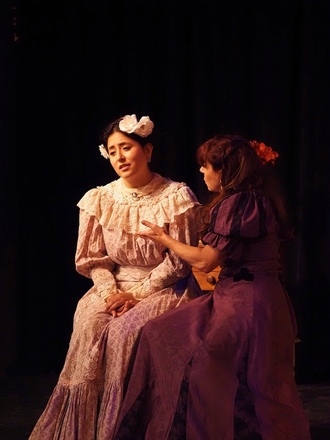 Alison Peltz plays Nora and portrays her as a self-assured woman, confident in the belief that striking out on her own was the right decision, but she also shows her vulnerability. She’s not perfect, and she’s made mistakes just like everyone else. Shirley Nilsen Hall plays the housekeeper/nanny Anne Marie in a strong performance with a range of emotions, ranging from her initial happiness at seeing Nora after so long to the anguish she feels about the impact on her own family and her anger at Nora’s selfishness. Jannely Calmell (right with Alison Peltz) is Emmy, Nora’s now grown daughter, and while she doesn’t have much interest in the mother she doesn’t really know—or want to know—she makes it clear that Nora’s decision to abandon her family had repercussions, giving her some insight into events that occurred after she left. Mark Clark, as Nora’s husband Torvald (above with Alison Peltz), has mixed emotions at seeing Nora again after so many years, including sadness at the failure of the marriage and confusion in trying to understand Nora. Throughout, Hnath revisits the themes of Ibsen’s play to show the unfairness of rigid gender roles and the challenges that occur when societal expectations dictate behavior and don’t respect individual needs. In addition, deception, which was a major theme in A Doll’s House, comes into play, along with a desire to protect one’s reputation. 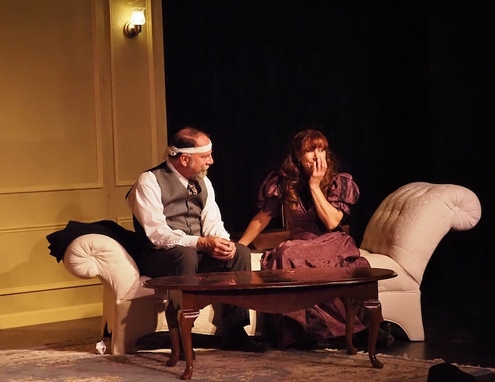 The action takes place entirely in the Helmer home in Norway in 1894, and Michael Walraven’s set reflects the period, with classic furniture, a prominent front door and small details that suggest a refined lifestyle. Hnath tells the story in 21st century English, which is coarser and more direct that the language of the late 19th century would have been. It’s an unusual choice, but it drives home the main point that both Ibsen’s and Hnath’s plays make: a basic inequality exists between men and woman, and it’s based solely on gender, not intelligence or ability. It’s a message that resonates with modern audiences, because many of the arguments Nora made in 1895 are still relevant. Today’s women might have more freedom to pursue careers and fulfill their own dreams, but they still face unique challenges simply because they’re women.

A Doll’s House Part 2 runs an hour and 15 minutes without an intermission, and Eichenberg’s skillful direction keeps it moving at a steady pace that never lags. It’s an intelligent and attractive production that’s a strong conclusion to Novato Theater Company’s 2021-2022 season.

A Doll’s House Part 2 plays Friday, Saturday and Sunday through Sunday, June 12. For tickets and more information, go to novatotheatercompany.org. 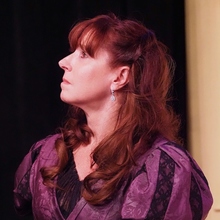