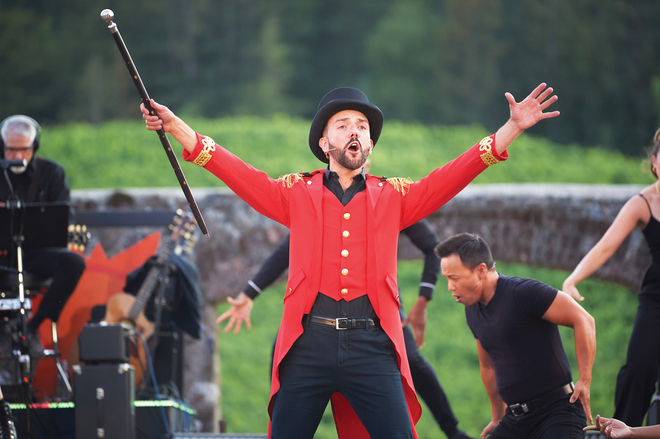 Music has a magical ability to lift the spirits and create joy, and Transcendence Theatre makes the most of it in Hooray for Hollywood. The current show, running on weekend evenings in the outdoor theater at Jack London State Historic Park, is a salute to songs from the movies, and it has plenty to offer to keep the toes tapping along with the rhythm. “I’ve always loved movie music,” says Susan Draus, conceiver and music director. “So I decided to create a show that paid tribute to movies from all eras that appealed to all ages.” 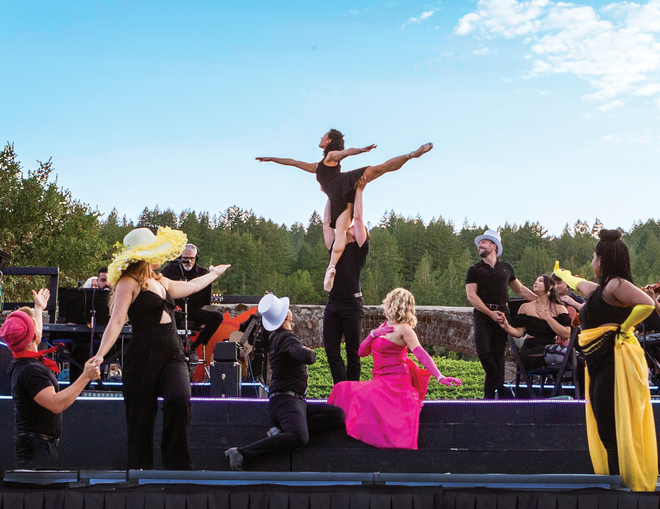 The company of Hooray for Hollywood. Photo: Ray Mabry Photography

The show, in two acts, features groups of songs with a common theme, starting with The Classics. The opening tune is The Greatest Show, which is a tip of the hat to The Greatest Showman, a film about the life of P.T. Barnum, and with enthusiastic singing and energetic dancing, it sets the mood for what’s to come. Next comes a medley of favorite songs from cinema, beginning with Hooray for Hollywood, a film that MGM released in 1974 to celebrate the studio’s 50th birthday. The movie was a retrospective of songs from musical films from the 1920s to 1950s, and Transcendence has chosen some of the best, including Good Mornin’ from Singin’ in the Rain, complete with a tap-dancing segment, and An American in Paris from the film with the same name, which features beautifully choreographed dancing that combines athleticism with art. 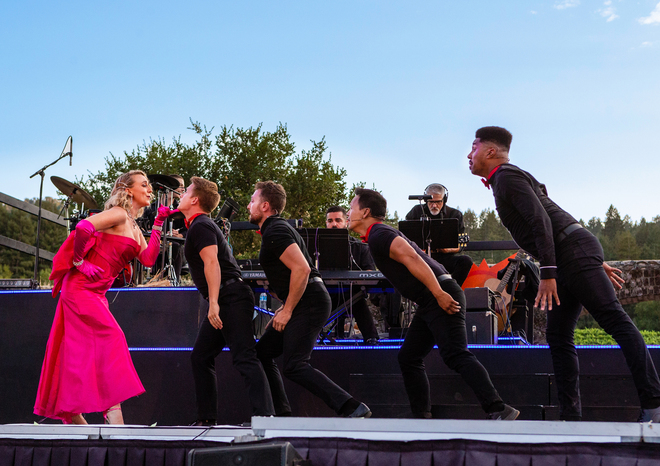 Next up is Growing Pains, and it focuses on the trials of adolescence. Town Without Pity underscores the pain that results when people are judgmental and lack empathy. The mood then shifts from drama into high spirits with Telephone Hour from Bye Bye Birdie and Jailhouse Rock, which features Carl Draper channeling Elvis Presley with grinding hips and the King’s Mississippi drawl. Heroes takes songs from Ghostbusters and James Bond and Monty Python films, among others, and Arielle Crosby is a standout performing Zero to Hero from the Disney movie Hercules. Young at Heart rounds out Act 1, and a high point is Step in Time from Mary Poppins, with its singing and dancing crew of chimneysweeps. 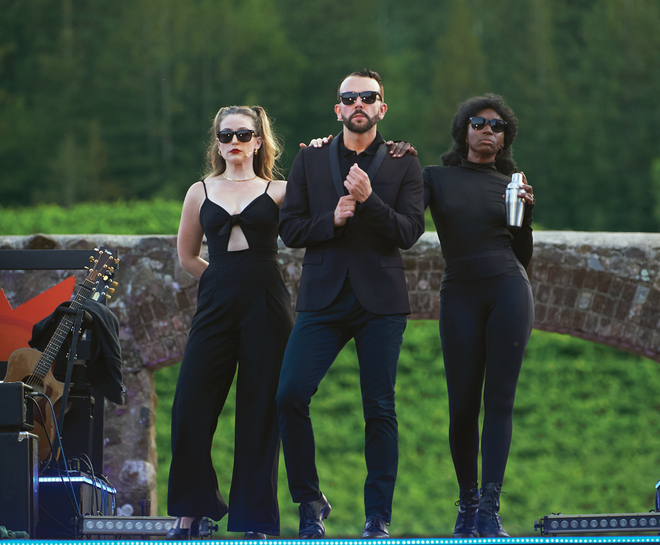 Act 2 features songs that either originated or were featured in movies, and several also stand alone as hit songs. Associate Music Director Alejandro Senior moves from his on-stage keyboard to a piano off the sider, clad in a glitzy jacket for a high-energy, totally fun performance of songs by two 1950’s musical stars. La Bamba is the theme song for a 1987 film about the short life of Ritchie Valens, who perished in a plane crash just as his career was getting started. Great Balls of Fire is from a film of the same name about Jerry Lee Lewis, which was released more than 30 years after he made the song famous. Alyson Snyder, Amanda Lopez and Arielle Crosby deliver a lovely, pensive rendering of The Rose, a tune that Bette Midler made famous in a film loosely based on the life of Janis Joplin. Crosby's fine voice captures the emotion of Whitney Houston’s hit tune I Will Always Love You from The Bodyguard. Next, the company shifts into high gear for Dance Fever, an exuberant set with a medley of songs from Dirty Dancing, Footloose and more, featuring the whole company.

The show is full of surprises, and the focus is squarely on the performers, with the band on stage and the Sonoma hills as a backdrop. Some songs are on the old winery’s brick walls and in the center aisle, with Paul Hudson’s lighting design putting the performers in the spotlight.

Alaina Mills is the show's director and choreographer, and she explains the role of music in film, saying, “The music sets our moods and is our cue to feel what the film wants to us to feel.” Mood is also integral to Hooray for Hollywood. The performers radiate a kind of joy that’s infectious, and they appear to love what they’re doing so much that the audience picks up the vibe and feels good too. Their smiles and spirit can’t help making people happy, as they strive to give them “the best night ever.”

Hooray for Hollywood runs on Friday, Saturday and Sunday evenings through Sunday, August 14, at Jack London State Historic Park in Glen Ellen. Next up is The Gala, which runs from Friday, September 9 to Sunday, September 18.For more information, and tickets, go to bestnightever.org.

A portion of proceeds from all shows goes to the park, and to date, Transcendence Theatre Company has donated more than $600,000.

Dance Under the Stars 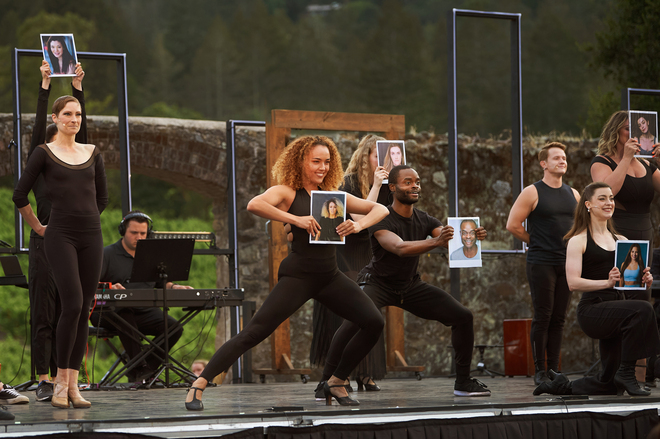 The athleticism and creativity of dance makes it a magical art form. It can can convey joy or sadness, and when it’s high-energy, it spreads a feeling of exuberance that makes the audience want to get into the rhythm, tap their toes and be part of the fun. Transcendence Theatre Company makes the most of it in “Let’s Dance,” its opening show for this summer’s season at Jack London State Historic Park, in a unique setting, where one of literature’s greats once resided. 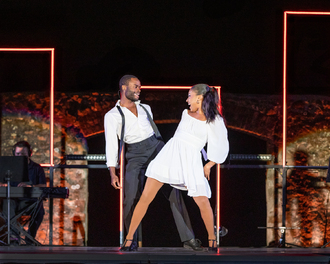 The show opens with the full cast considering musical theater and what makes it appealing, Artistic director Amy Miller follows with opening remarks that put the spotlight on the power of dance and give the production context. “Dance is connection, adventure, possibilities and cultural exchange,” she says, and the show’s two acts explore those elements. In Act One—Pimer Acto—Latin-lite Golden Age Medley features songs and dances from Broadway musicals with a Latin influence, and Happy Facemasque features the unlikely combination of Bye Bye Birdie and The Phantom of the Opera with the full cast in costume demonstrating fancy footwork and precise choreography. Transcendence Theatre Company often has surprises, and the first act ends with a creative take on the theme song from 42nd Street with internationally recognized Luis Antonio Vilchez Vargas on percussion in an energetic and unique performance. 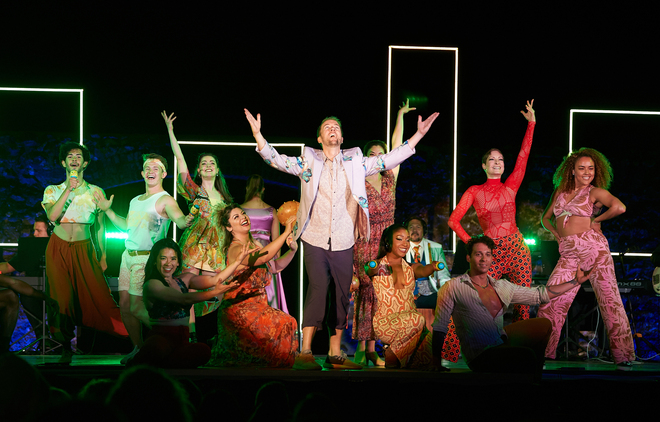 Vilchez Vargas returns in Act Two—Segundo Acto—to show off his skills as a percussionist with novelty instruments and also as a tap dancer, which might be considered another form of percussion. Also an educator, he connects with audience and invites their participation in a lively number that brings smiles. The second act also celebrates the work of the late musical-theater great Stephen Sondheim. Color and Light, from Sondheim’s Sunday in the Park with George, makes creative use of a series of rectangular frames, which are prominent on a stage with minimalist set design that allows the Sonoma hills and Wine Country to provide a natural backdrop as the sun sets, and the stars come out. Matt Smart conducts the band, and with music being an essential element of dance, it’s fitting that the musicians are onstage.

Several quotes from Jack London at appropriate spots during the show connect art forms, add meaning to the production numbers and give the audience something to think about. 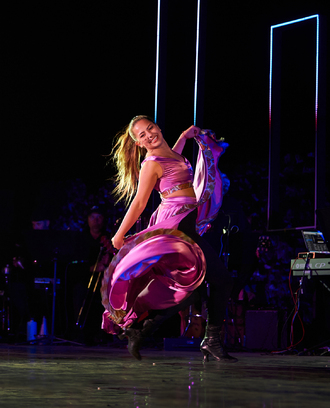 Director Luis Salgado promises a show with musical styles and performers from the around the globe and delivers with a show that celebrates cultural diversity. He describes it as “Community, integration, cultural exchange and all of us dancing through life in harmony with the sky, the trees and each other.” It’s a vision of life that’s part of creating yet another “Best Night Ever” under the open sky with nature all around.

Any art form is an opportunity for us to see the world from a new, often unexpected, perspective, allowing us to open our eyes and see new possibilities. At the same time, it can foster cultural understanding, elicit empathy and stir emotions. Transcendence Theatre Company continues to push the boundaries in exploring the world around us and take us on cultural adventures, and hopefully, we come away better for it.

Thanks to the Presentation Sponsors, 5% of the proceeds from Let’s Dance will go to support Jack London State Historic Park. The donations are a standing commitment , and to date, Transcendence Theatre Company has donated $600,000 to the park.

For more information and to order tickets, go to transcendencetheatre.org. Let’s Dance runs through July 3. Hooray for Hollywood opens on July 29 and runs through August 14. Food trucks will be open before the show, giving patrons a chance to enjoy a picnic and pre-show music.

Check out Skits Under the Stars—evening of art and music at local wineries, where local artists can share their work—at https://transcendencetheatre.org/community/. Aspiring artists who would like to perform should arrive half an hour early to sign up.

Ready for the best summer ever in 2022 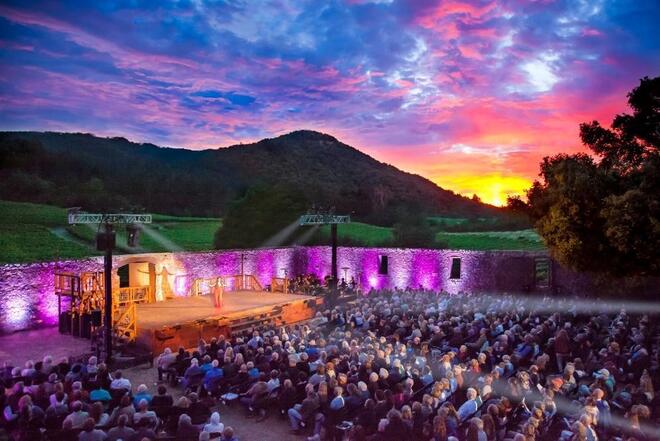 Mark your calendar for the magic of musical theater! Transcendence Theatre Company returns to its outdoor stage with a view at Jack London Historic State Park beginning in June, and the summer season promises a lineup of unforgettable experiences. Transcendence is entering its second decade of celebrating music, movies and the brilliance of Broadway, and “Our 11th season is going to be an eclectic mix of every type of entertainment,” says artistic director Amy Miller. “We have brought together performers and creative teams from around the world to present an electrifying program that will take audiences back to yesteryear and open the doors to tomorrow. We cannot wait to share this season with the community and have the Best Night Ever."

Transcendence Theatre Company also unveils a new look for its 11th season. “As we embark on our next decade and beyond of presenting premiere entertainment in Sonoma Valley, we are excited to share our new company brand that celebrates the strength of our community and the breathtaking beauty that surrounds us," says executive director Brad Surosky. 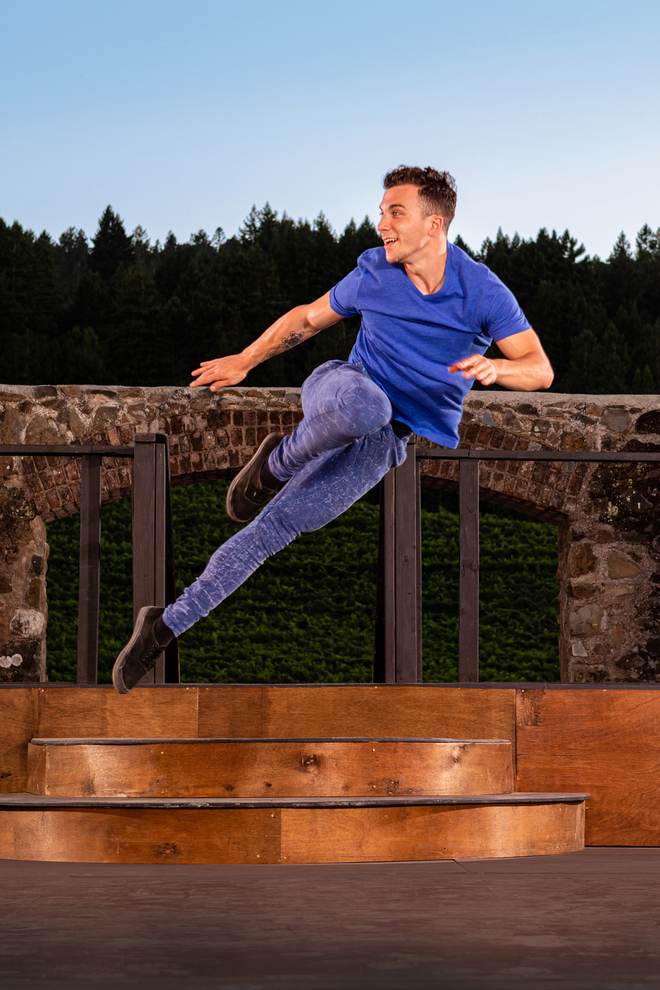 Here's what to look forward to this summer.

Transcendence puts the focus on danced and reimagines Broadway show-stoppers with a thrilling infusion of Latin, jazz and modern music featuring high kicks, foot-stomping and powerhouse vocals. Songs are from 42nd Street, Guys and Dolls, Wicked, Company and more, giving the audience the opportunity to enjoy New York favorites close to home in Sonoma Valley.

A full band of brass, strings and percussion will back 15 performers to bring a century’s worth of musical favorites from the movies live to the stage. Songs from timeless classics like the Wizard of Oz and hits from more recent films such as The Greatest Showman will make a memorable evening for the whole family. 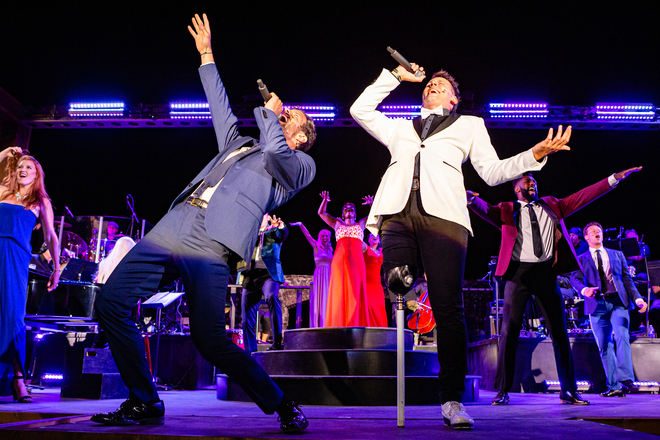 The Gala, Transcendence’s annual touchstone event returns in September, with an Broadway hits and new surprises in a one-of-a-kind enchanted evening.
Chip Abbott (Tootsie) and Matt Smart (Hamilton) conceived the production, and Abbott will also direct and choreograph the production, with musical direction by Smart. Dee Tomasetta (FOX’s “So You Think You Can Dance”) serves as the associate choreographer.

Tickets
Get a taste of Transcendence at https://www.youtube.com/watch?v=wtucIrMwGRc.

Tickets are now on sale. Prices range from $25 to $165 for individual savings of 15% for purchasing season’s tickets. Save 10% on individual tickets with Early Bird pricing before May 9. Go to www.bestnightever.org for more information or call the box office at 877-424-14145.

About Transcendence Theatre Company:  Transcendence Theatre Company is California Wine Country’s premiere entertainment experience. With three original outdoor musical revues every summer, an indoor holiday show every winter and more, its mission is to create extraordinary evenings featuring outstanding talent from Broadway and beyond. From its primary home within the majestic open-air ruins of the historic winery in Jack London State Historic Park to other remarkable and stunning settings throughout Wine Country and the community, Transcendence Theatre Company is dedicated to providing the joys and benefits of musical theater to all through one of a kind performances, community engagement and arts education programs.

Each Transcendence show includes a pre-show picnic in the park’s sprawling vineyard and meadow and features a variety of local businesses, including gourmet food trucks, vendors, pre-show entertainment and fine wine from acclaimed Sonoma County wineries. 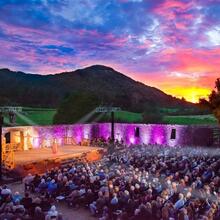