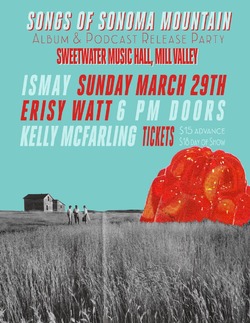 Ismay is celebrating the release of Songs of Sonoma Mountain, their first full-length album, at Sweetwater on Sunday, March 29. In an evening of indie folk music rooted in nature and reflective of the freedom of the outdoors, the Ismay album and podcast release party will open with special guests Kelly McFarling and Erisy Watt. Doors open at 6:00pm; the show begins at 7:00pm.

Songs of Sonoma Mountain marks the first full-length record from Ismay. Representing the work of singer/songwriter Avery Hellman and recorded in a 100-year-old sheep barn at a Sonoma ranch, the album immerses the listener closer to nature through the world of Sonoma Mountain. Co-produced by Robert Cheek (Band of Horses, Chelsea Wolfe) and Avery Hellman, Songs of Sonoma Mountain features live performances that draw out the character of the space; telling stories from the perspective of the mountain, its animals and Ismay themselves to examine gender identity, loss and a search for belonging. Glide Magazine calls the album, "An enchanting composition that reflects the storybook wistfulness of Aldous Harding and Weyes Blood. Ismay helps usher in an era of mystical folk that is both incisive and playful and somewhat mysterious."

The record interweaves field recordings with intricate songwriting and experimental production. To accompany this production, Ismay has also compiled a series of narrative documentary stories to be released as a podcast: Where the World Begins.

Named after a town of 19 in the Northern Great Plains, Ismay represents the work of singer/songwriter Avery Hellman. Ismay explores how the places we live change us and how the natural world provides deeper meaning. For Ismay, a life lived in rural California connects them to the landscape, providing a freedom to express gender identity and the space to create music. Mystical lyricism, ethereal vocals and dynamic fingerpicking on guitar are the defining features of the music. With works covering from wild horses to wildfire, Ismay’s sound is unmistakably connected to their native landscape.

Opening for Ismay are special guests Kelly McFarling and Erisy Watt. McFarling is an Atlanta-born, San Francisco-based songwriter who plays banjo and acoustic guitar. Her work is reflective of the wilderness and its navigation and transitions. When she’s not working solo, she plays Telecaster for The Home Team, her band with pedal steel guitarist Tim Marcus, drummer Nick Cobbett, bass player Oscar Westesson and other Bay Area artists.

Erisy Watt is a Nashville-raised folk artist based in Portland who is regularly lauded as the next in line to Joni Mitchell or Norah Jones. Watts’ brand of contemporary folk complements the theme of the evening. Inspired by her time living along the central coast of California and her travels in remote Thailand, Indonesia and Nepal, her music invites listeners to rejoice in the beauty and freedom of wilder places. She released her a debut album in July 2019, and has performed several US and international tours over the past years.

Doors open at 6:00pm; the show begins at 7:00pm. Tickets are $17 in advance and $20 at the door. Tickets can be purchased online here. For more information, visit SweetwaterMusicHall.com