Musical Productions on the Mountain 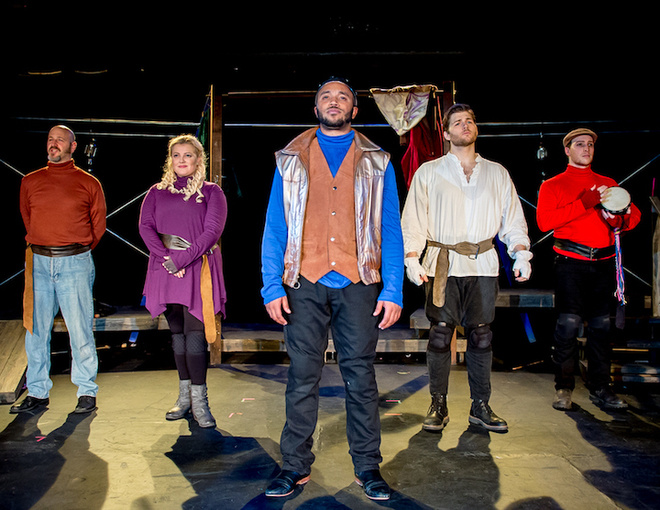 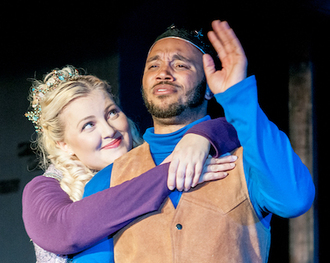 Camelot is a change of pace for the Mountain Play. Instead of an open-air production on an expansive stage atop Mt. Tamalpais, it’s moved indoors to the Barn Theatre at the Marin Art and Garden Center, which is tiny in comparison and seats 99 instead of several thousand. The change of venue demands a kind of simplicity for the production, which is in partnership with Ross Valley Players, and the result is a more intimate experience for cast and audience alike.

Camelot premiered as a Broadway musical in 1960 and is based on T.H. White’s 1958 novel The Once and Future King, which is a retelling of Le Morte D’Arthur, Sir Thomas Mallory’s story from 1485 about the legendary King Arthur and Knights of the Round Table. Alan Jay Lerner (book and lyrics) and Frederick Loewe (music) recreated the tale as a musical for Broadway in 1960, and the different iterations demonstrate that it’s open to interpretation, leaving the Mountain Play free to make adaptations to accommodate a setting that’s vastly different to either its usual home in the Cushing Memorial Amphitheatre or a New York stage.

The Mountain Play’s reinvention and downsizing of the musical was the result of necessity but is meaningful, nonetheless. Director Zoë Swenson-Graham explains that in simplifying the show, she considered what’s important and focused on how to create an inclusive process that brings joy. “This version of the show forces us to let go of the tricks, realism, intricate set and props and instead lean into our imaginations and the power of play,” she says. One of the most important aspects is the connections people make as the Mountain Play returns to live theater after missing two years of main-stage productions due to the pandemic. 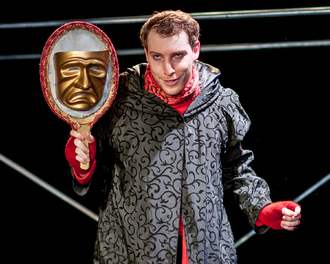 The story revolves around King Arthur; Queen Guinevere; Sir Lancelot, a French knight intent on joining Arthur’s cadre of knights; and Arthur’s illegitimate son Mordred, who exploits human emotions to undermine the shining ideals of dignity and honor that Camelot represents. Phillip Percy Williams, who is also music director, plays Arthur, a character who goes from being an idealistic youth about to embark on an arranged marriage to becoming a mature and compassionate man forced to face life’s disappointments and realities. Williams has a fine voice and a track record of singing in major venues such as Carnegie Hall, Lincoln Center and Davies Hall, and his opening song, I Wonder What the King is Doing Tonight, delivers in both strength and emotion. Krista Joy Serpa portrays Guinevere, and she too brings passion to her songs, beginning with The Simple Joys of Maidenhood, as she resists her impending marriage in vain. Isaak Heath, who studied acting at the College of Marin, is Lancelot, and his heartfelt rendition of “If Ever I Would Leave You is one of Camelot’s notable songs,. Matt Skinner is Mordred, who brings conflict to Camelot’s idealized world and signals his intentions in The Seven Deadly Virtues. He also plays Squire Dap (left). The smaller than usual cast numbers eight, with everyone playing at least two roles. 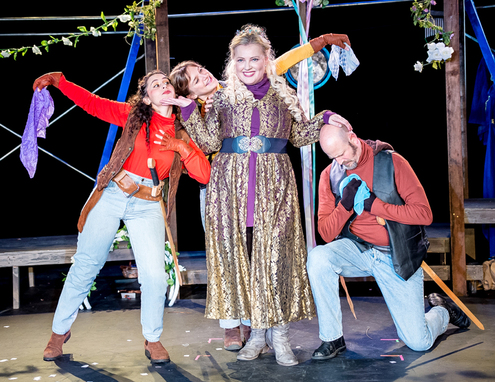 Michael Walraven’s set is rustic and simple, as is required on The Barn’s small stage, but it allows the transition to different places and times effectively. Costumes have modern-day casual elements and are decidedly less elaborate than those in the original Broadway musical, and the overall visual simplicity of the production means that members of the audience must put their imaginations to work and rely on somewhat more than the usual suspension of disbelief to fully engage with the story.

The result is a theatrical experience that prods the viewer to contemplate the issues, whether they are idealism vs. realism or compassion vs. revenge. Swenson-Graham quotes one of Arthur’s lines: “True love has no conditions and is not perfect.” The same is often true of the best plays. They have the ability to reflect life and make us think about what is most important to us as individuals in an imperfect world.

Camelot plays at The Barn Theatre at the Marin Art & Garden Center, 30 Sir Francis Drake Blvd, Ross, Thursday through Sunday from Friday, November 26, to Sunday, December 19. Go to www.mountainplay.org for tickets and more information, as well as the current COVID protocol.