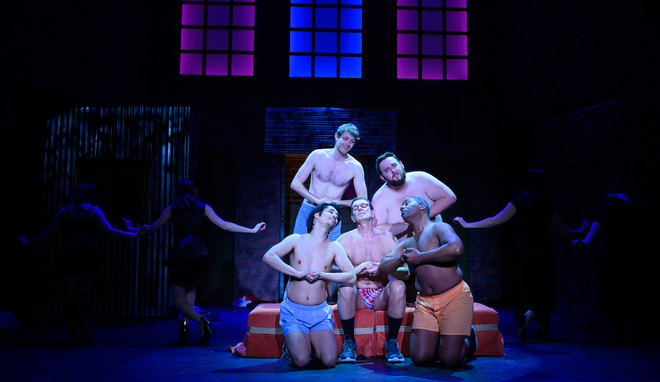 Will they or won’t they? That’s the big question that underscores Bay Area Musicals current production of The Full Monty. The story takes place in 1994 and revolves about six steelworkers in Buffalo, NY, who are out of money and low on self-esteem following the closure of the mill where they worked. As they sit around contemplating how to fix their broken lives, they recognize the popularity of the Chippendales, a  group of male dancers who’ve got the attention of  the community’s women, and strike on an idea to make some money. Despite their lack of stage experience or any evident talent, they decide to put on a strip show, and they’ll differentiate it from similar shows by taking it all off—going the full monty—which they believe will ensure its success. 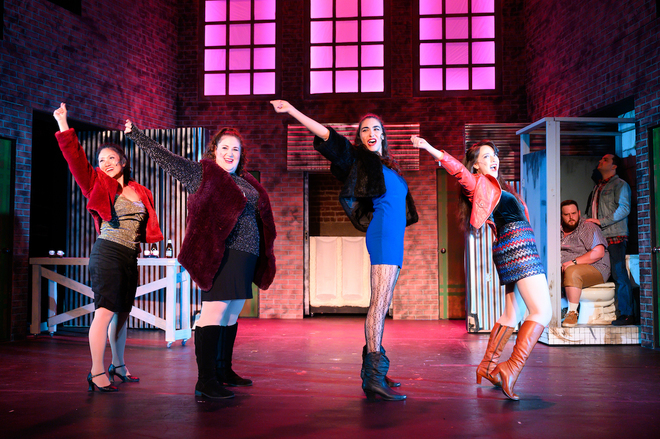 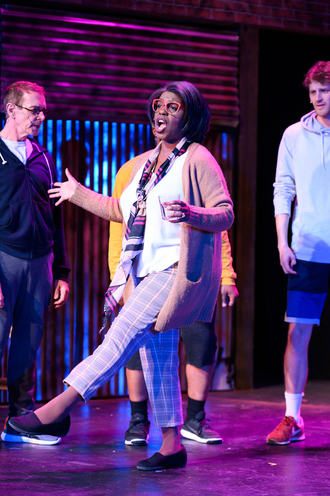 The six men, played by James Schott as Jerry Lukowsky, Chris Plank as Dave Bukatinsky, Arthur Scappaticci as Harold Nichols, Jackson Thea as Malcolm, MacGregor, Stephen Kanaski as Ethan Girard and Albert Hodge as Noah “Horse” T. Simmons, go beyond the macho persona of steelworkers to show their insecurities and doubts as they go through one of the biggest challenges of their lives. They’re not well education educated and are firmly rooted in stereotypes about a man’s role, but they evolve and grow as they grapple with exposing themselves in unexpected ways. Christopher Apy (below with James Schott) is endearing as Jerry Lukowski’s young son Nathan, and the strength of their bond is heartwarming and shows the importance of fatherhood and family. The women in their lives are the catalyst for the action the men take. Desiree Juanes as Pam Lukowski nags Jerry to take a job as security guard until he eventually gives in, while Briel Pomerantz as Georgie Bukatinsky and Adrienne Herro as Vicki Nichols affirm their love for their husbands, no matter what and are touching in the tender tune “You Rule My World.” Michelle Ianiro (right) is a standout as Jeannette Burmeister, who takes over direction of the show when it becomes clear that the men don’t have a clue how to pull it all together. 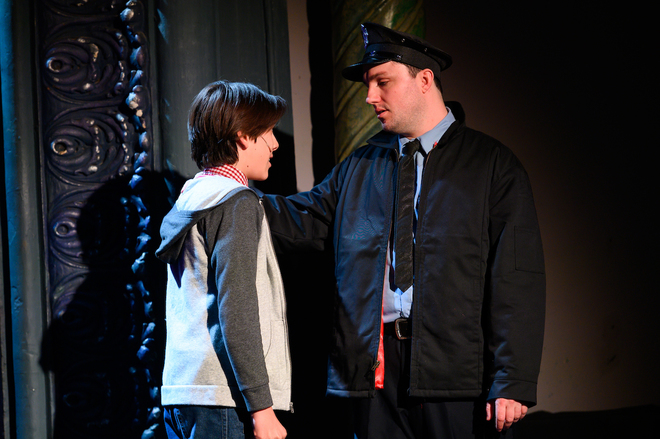 Leslie Waggoner is both director and choreographer, and Jon Gallo is music director, and they make the most of a cast that sings, dances and acts with ease, unlike the some of the characters they play in the story. Despite the depression that marks some characters’ live, the show is never a downer; in contrast, it’s a comedy that’s uplifting with lots of funny moments as the men discover what counts most in life. 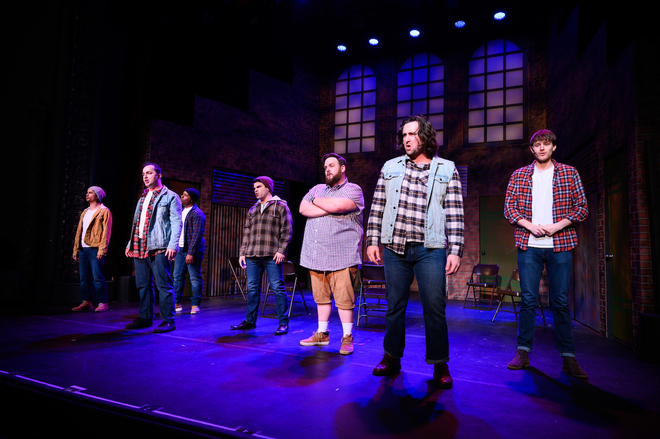 The musical The Full Monty is adapted from the British film of the same name, with book by Terrence McNally and music and lyrics by David Yasbek, and it successfully makes the transition to the American stage and Buffalo, NY, where Bethlehem Steel, one of the area’s largest employers, closed its Lackawanna plant in the 1980s, creating economic hardship for the workers who lost their jobs. It has the grittiness of real life, and yet entertains with empathy and kindness, while it gives the audience a chance to cheer the underdogs, rock along to the music and enjoy some laughs all at the same time.

The Full Monty runs through at the Victoria Theatre, 2961 16th Street, San Francisco, through Sunday, March 15. For more information, go to bamsf.org. 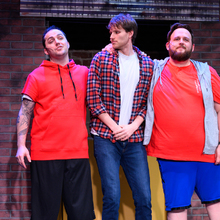