She Loves Me Review

Holiday Fun at the Barn

She Loves Me—Romance and Laughter at the Barn 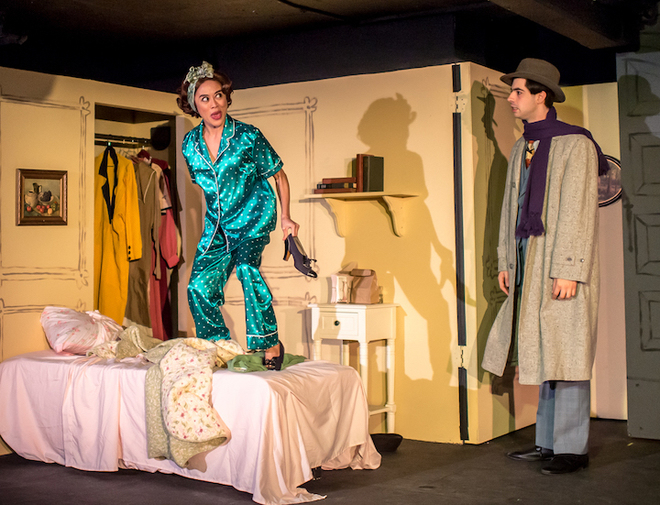 Marah Sotelo as Amalia Balash and Max Kligman as George Nowack in She Loves Me, a Mountain Play/Ross Valley Players co-production at the Barn Theatre at the Marin Art & Garden Center.

Human nature is endlessly entertaining, and when it’s paired with the unrecognized potential for romance, it’s a pleasing combination. It’s a favorite premise for comedy, and the Mountain Play and Ross Valley Players make the most of it in partnering to bring She Loves Me, a light and lovely musical, to the Barn Theatre just in time for the holiday season. While it might seem like an unusual pairing, RVP and the Mountain Play have a long history. In 1935, RVP produced The World We Live In as that year’s Mountain Play, and 2018, the two companies collaborated on a musical reading of a new version of Swiss Family Robinson. 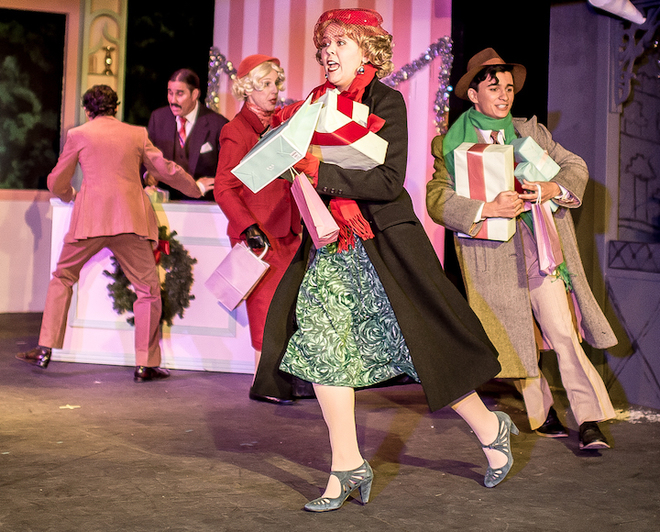 Holiday shopping in the perfume shop, featuring the Ensemble.

She Loves Me opened as a Broadway musical in 1963, with book by Joe Masteroff, music by Jerry Bock and lyrics by Sheldon Harnick. It was based on Parfumerie, a Hungarian play by Miklós László that premiered in English in New York in the late 1930s, and it was the inspiration for several screen adaptations, including The Shop Around the Corner with James Stewart and Margaret Sullavan in 1940 and You’ve Got Mail, starring Meg Ryan and Tom Hanks in 1998. It involves two employees of a Hungarian perfume shop who are longing for love and answer a lonely-hearts advertisement in a newspaper. Each is connected by mail with an unidentified potential match, and the letters they receive from their anonymous beaux are bright spots in their days. 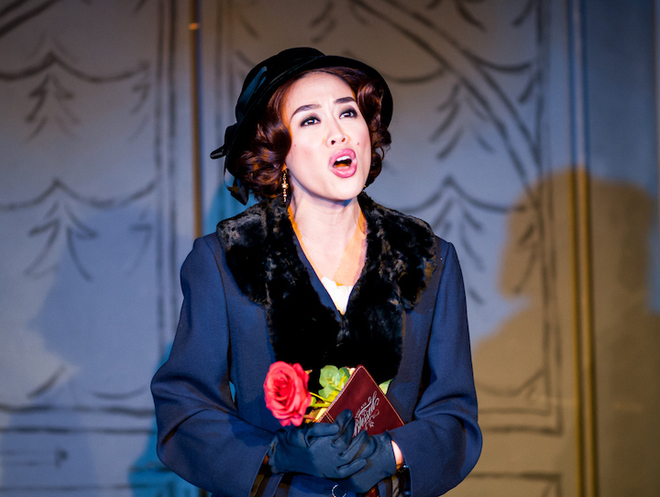 Much of the action takes place in perfume shop, where the employees give an old-world courtesy and sensibility to the shopping experience. Marah Sotelo shines as Amalia Balash, the perfume saleslady looking for a suitor, and she brings passion and energy to the role, as well as a beautiful voice that makes her songs a highlight of the show. Max Kligman is her equal in his portrayal as Georg Nowack, a colleague in the shop who perceives Amalia as snobbish and irritating and also wants love in his life. At first rather intolerant, he eventually gains a depth of understanding that he reveals gradually with kindness and tact. Alex Cook draws smiles as Arpad, the delivery boy with ambitions, and Ilona Ritter is delightful as the naughty girl who finds true love where and when she least expects it. Antony Maglio is the scurrilous Steven Koday, while Ron Dritz plays the affable store owner, Mr. Maraczek, who gives an added twist to the story with his own misperception of a personal situation. 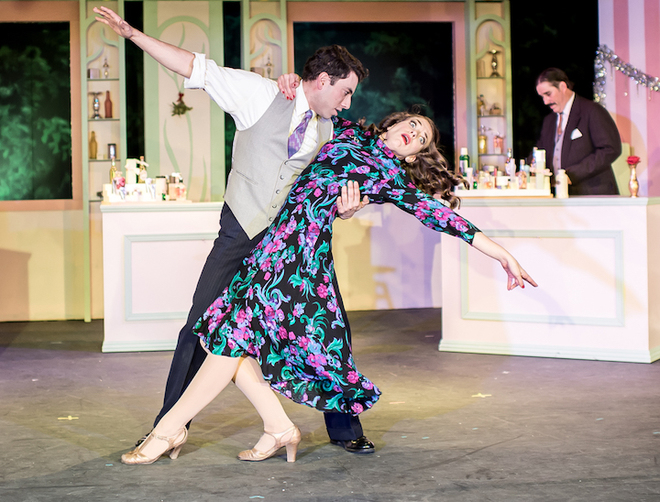 Nicole Helfer, who has a track record with the Mountain Play and shows at 42nd Street Moon among her considerable credits, directs with a sure hand that focuses on the cast’s talents and coordination that results in a cohesive, well-paced production. Jake Gale is the music director, who appears at the side of the stage but is never a distraction. Tom O’Brien and Michael Walraven designed the set, and while the parfumerie in 1930s Hungary is central, the set also makes the transition to a club, Amalia’s bedroom and other locations easily. Michael A. Berg’s costumes help set the play in time and place with a pre-war 1930s look, complete with the mandatory hats and shoes of the day. 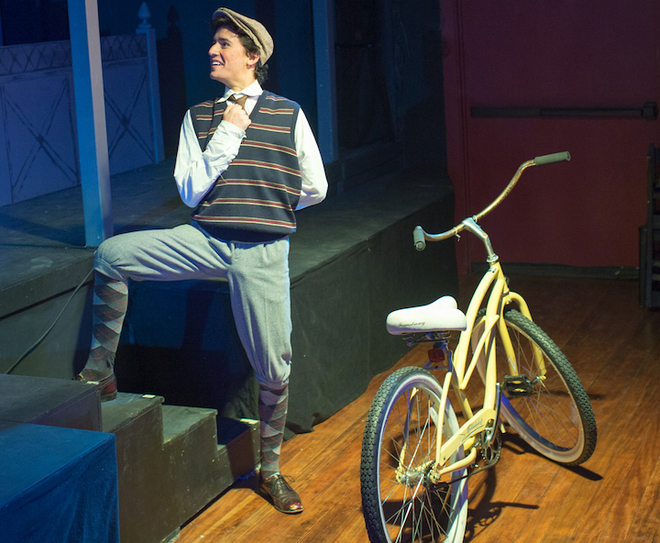 She Loves Me warms the heart and shows its faith in humanity. It was a respite from increasingly dark times in Europe when the play premiered in Hungary in the 1930s, and it showed the importance of love and positive human relationships. As such, it’s an antidote for dreary days and difficult times. It’s charming and heartfelt, and that makes it a perfect gift for this holiday season. 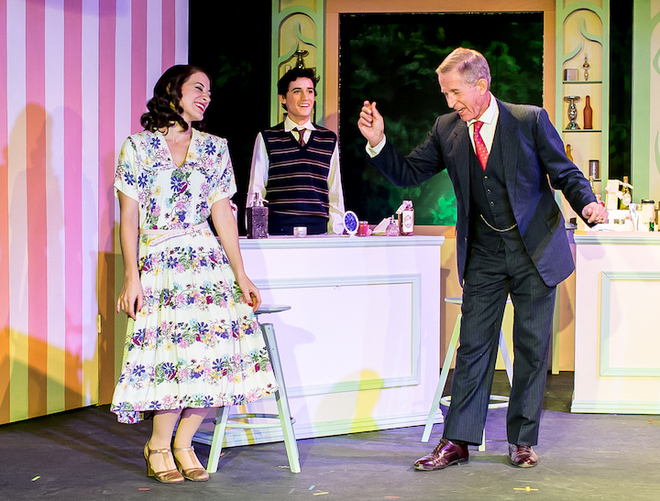 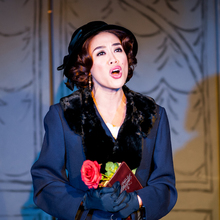