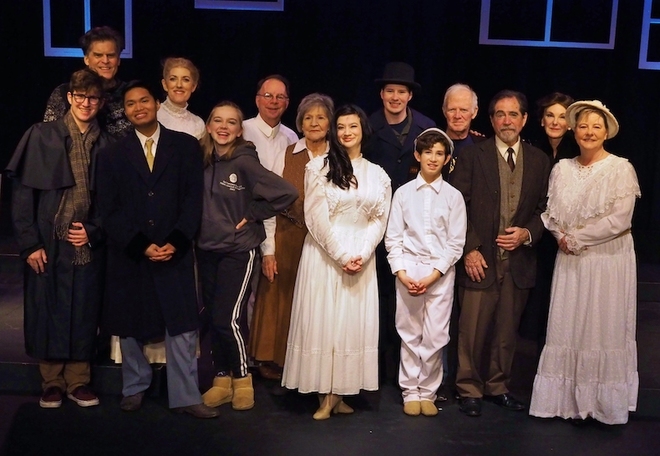 The cast of Thornton Wilder's Our Town at Novato Theater Company

Thornton Wilder’s Our Town is a classic for its familiar but unique portrayal of everyday life. A mother makes breakfast, a father goes to work and a milkman makes deliveries, and in the predictable cycle of life, characters get married, babies are born, and people die. It’s not a particularly original story, and yet it resonates with the audience. What sets it apart is its structure, which breaks down the usual barriers between audience and actors, and the way it challenges the audience to see value in life’s commonplace yet precious moments.

Our Town had its first performance in Princeton, New Jersey, in 1938, putting its simplicity into stark contrast with increasingly complex world events that led to the outbreak of World War II the following year. Wilder won a Pulitzer Prize in Drama for the metatheatrical play in three acts, which forces audiences to abandon the usual suspension of disbelief by making the theater itself an integral part of the action, while requiring viewers to use their imaginations to round out the picture. 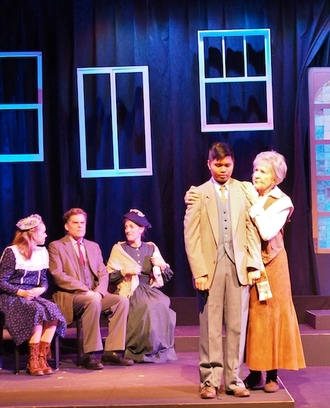 The story takes place in Grover’s Corners, New Hampshire, from 1901 to 1913, and it revolves around two families, the Webbs and the Gibbs. Key to the action is the Stage Manager, who acts as a guide, makes commentary, answers questions from the audience and plays small roles. For instance, the Stage Manager invites a guest lecturer, Professor Joseph Willard, to share the town’s history, and she provides flashbacks to give the backstory at a point when the action jumps forward. In Novato Theater Company’s current production, Christine Macomber is a standout as the Stage Manager (left, with Bryan Munar as George Gibbs), bringing energy and enthusiasm to the role and making seamless transitions, as she keeps the action moving forward and provides essential information, beginning with a vision of the town’s layout. 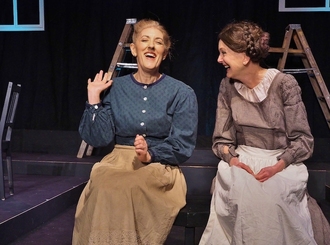 Kristine Ann Lowry plays Mrs. Webb, and she’s a straightforward woman who’s also wise and caring, as she demonstrates on the morning of her daughter Emily’s wedding, as she deals with details such as how much milk to buy for guests and Emily’s pre-wedding jitters. Michael Walraven is Mr. Webb, the publisher and editor of the local newspaper, and he effectively interacts with the audience when he delivers a report in Act I. Jennifer Reimer plays Mrs. Gibbs, who longs to see the world beyond Grover’s Corners, while John Simpson plays Dr. Gibbs, who is integral to theme of Act I—Birth—having just attended the birth of twins. Nicole Thordsen is Emily Webb, and hers is a crucial in delivering the central message of the play. It’s a well-balanced cast, with several actors playing multiple roles. (Photo: Jennifer Reimer (l.) as Mrs. Webb and Kristine Ann Lowry as Mrs. Gibbs.) 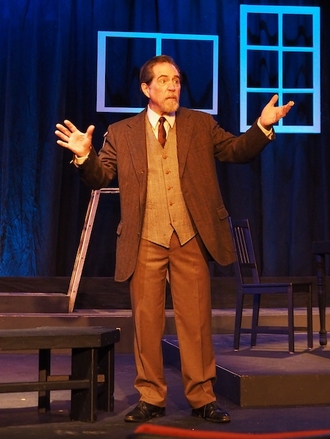 The set is minimal, with a mostly bare stage putting a focus on the play’s simplicity. Furniture is limited to two tables, a few chairs and two ladders. Windows adorn the backdrop but seem to have no real purpose. Props are absent, so whether it’s the women pouring coffee or the milkman dropping off bottles of milk, the actors simulate the motions and leave it to imagination of the individual viewer to add the missing pieces. The movements are often reminiscent of Japanese Noh theater, which was one of Wilder’s inspirations. (Photo: Michael Walraven as Mr. Webb.)

Director Michael Barr reports that Wilder was dissatisfied with the lack of depth, humanity and emotional resonance in American theater in his day. In Our Town, however, he demonstrated that it was indeed possible to include such elements and in an illuminating way without elaborate trappings. The play’s brilliance lies in both its theatrical innovation and the story’s simplicity, as well as its ability to deliver a powerful message about the human condition. And it’s a message that’s timeless.

Our Town runs through Sunday, February 16, at Novato Theater Company, 5420 Nave Drive, Novato. For more information, go to www.novatotheatercompany.org or call 415-883-4498. Performances are at 7:30 p.m. on Friday and Saturday and 2 p.m. on Sunday. 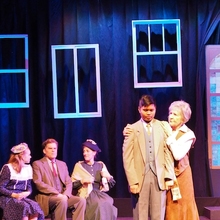